Apocalypse brought to you by asteroid

What is the number one reason for apocalypse in video games? Well it could be nuclear weapons or massive pollution. Aliens maybe. Or demonic powers breaking lose hell on earth. So what is the reason in Rage? It’s a giant asteroid from outer space named Apophis – that in fact does really exists – that hits the earth. Does that make a huge difference for live on earth?

Well yes and no. Yes there is a difference because there is no nuclear radiation the people have to worry about. Otherwise, no there is no difference, because the massive explosion destroyed the majority of life on this planet and left it behind with lots of mutated scum and stuff. Welcome to hell.

Tech: Graphics and audio in Rage

The first impression right after the start is: Great visuals ingame. Rage really is a feast for the eyes. Rugged mountains on the horizon, fantastic sky visualization with flowing clouds and and impressive sun reflections. Highly detailed surroundings that really make you fell like crushed into an apocalyptic scenario. The first steps in Rage really are visually impressive. And the game will stay that way.

Everything looks ridiculously good. Except for some “sprite-plants” and loading issues with the PlayStation-3-version we had to test. But apart from these flaws id software did a great job. They invested a lot of effort into building up the apocalyptic desert the earth would look like when hit by an enormous asteroid like Apophis. Outside in the world of Rage as well as inside destroyed buildings and city-parts the player will visit during the game.

Plus the animations are great and and full of little details. The developers at id software really did a great job on that regard. Rage seems like they have really cared for the visual aspect. The audio-output is a strong point too. Every gun ingame has its own sound and every creature and enemy the player will have to face has it’s own significant tone.

Controlling: How to push the button

Rage is a first-person-shooter in first-place. That’s why the shooting part is the most important for this review. And there’s nothing to complain about. The movement and the controlling works pretty good. Even with the gamepad on the PlayStation-3-console we tested Rage on the controlling is exact and precise.

The controlling of the car on the other hand is special. Of course Rage is not a racing-game by definition but if the racing is such an important part of the game it could and should be better than it is.

The cars in Rage only offer three types of speed. Standing, driving and nitro-boost. Plus every car has a “full-stop-break” that will make the car stop in no time. Even when coming from insane-nitro-boost-speed. Because of that the Rage-cars do not offer a large variety of possibilities and the driving-sequences are not that kind of fun they could have been potentially.

The shooting in Rage is pretty good. The enemies are well balanced and multi-variant. There are sniper-soldiers who take cover on top of huge buildings, close-combat mutants with clubs and sticks with nails in it who have artistic super-power and intense sprinting-abilities or renegade groups that split up to surround the player.

But even after been shot to pieces Rage is not entirely over. Players have a inbuilt defibrillator. This handy little gadget gives them the ability to resurrect if it has been fully loaded. This prevents gaming-downtimes.

Specials: Take the path of the Rage

In fact Rage is a game full of contrast. On one hand it tries to imply a wide open world country with lot’s of things to investigate. On the other hand it has a level-design like a tube. Players only have one choice to go. Even if there are obviously other possible routes the game blocks the player from using them.

Or another example: On one hand it offers lot of diversity (with racing, card games, special missions and stuff like that). On the other hand it makes everything else except from shooting-passages boring and repetitive. Most of the time not even challenging. 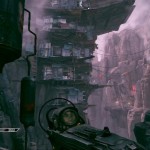 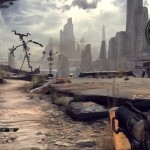 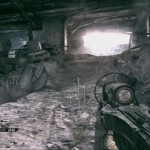 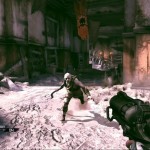 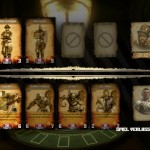 The best of the available minigames: The card game. 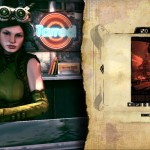 Of course Rage is not a Rail-Shooter per definition. But there is only one path Rage wants you to go and you have to stick to that path. No matter what. There is no other opportunity. No, really do not even try to. It’s hopeless. Who doesn’t like the Open World concept or is thankful for a given route to relax in front of a computer game Rage is the game you want to play. Or maybe not, because there is the …

… aspect of Rage. Or let’s try it another way around: If sometime in future id software want to release a racing game: Be sceptic! The racing-part of Rage is nothing like the racing game you would want to play if you like to drive a car in a virtual environment – even if you may have a favor for apocalyptic vehicles.

What is good in Rage? The shooting is. What is bad in Rage? The time when there is nothing to shoot. It is as simple as that. In Question of visualization Rage is outstandingly pretty. But the reason therefore is: the developers “only” had to design one specific path. So they had and used the opportunity to improve that one passage. The Shooting passages are intense and fun. The enemies are acting clever and there are a lot of them that differ in their fighting-tactics. The player has to look for opportunities and use them to be victorious.

On the other hand everything else feels put on. Even if the npc’s in Rage are well designed they seem like actors in an post-apocalyptic low-budget-movie. But that of course is a personal opinion. Plus even if the car-sequences are built in to loosen up the shooting-parts a bit, they are more frustrating than entertaining. What makes them even more worse is, that the player has to play at least a few of them to unlock new cars that are required to move on in the storyline.

Long story short: Rage could have easily been a lot better when the developers did not had build in other stuff than the shooting. Rage is available for the PlayStation 3 and Xbox 360 console, Windows and Mac OS X PC-systems. We tested the PlayStation 3 version with a German synchronization.