On every Penny Arcade Expo the so called PAX10 will be nominated by a grand-jury who handpick 10 indie-titles which are outstanding in any shape or form. This years PAX 2012 lasted from 31th of August till the 2nd of September and had of course a PAX10-pick! One of them was Deity, a stealth-action kind of game with lots of influence by different games. But the best on it: It is totally free of cost. A Freeware Game by the purest meaning of this wording.

What is Deity all about?

The reason behind Deity is not quite obvious. The players play as the Deity as far as I can tell. This little grim revenge-ghost has some kind of special abilities and is totally controllable only by the computer-mouse. But that does not mean it is not challenging. Because it is. If you choose the Hard- instead of the Normal- or even the Easy-Mode.

The reason therefore is that this grim ghost-reaper from the shadows has one weakness that is quite obvious: Light in any shape or form. If it is sunlight that slips through windows or firelight from torches. Light will damage the players character in Deity so it should be avoided as good as possible.

But the shadow-reaper in Deity has some techniques to avoid any kind of light. In fact it can turn it’s weakness into it’s favor by consuming torches for example. Therefore the demon jumps inside the torch and the otherwise brutally damaging source of light will turn into atmospheric purple shadowflames. A good place to stay and to hide. 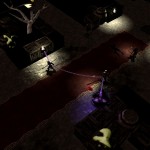 Because there are enemies to hide from in Deity. The game delivers different guards with different skills. And the Deity needs to pass them to get to the next passage. Therefore the revenge-ghost can use certain abilities like the aforementioned jumping into torches. Plus there are opportunities to jump on guards to kill them instantly and clever mechanics to chain-attack and flee unseen. More information on this techniques and guards plus an explaining video can be found here.

And this game really is Freeware?

Yes it is! The developers are a dedicated group of students from the DigiPen university from Redmond in the State Washington in the USA. Given that information it is indeed better understandable why the free game is as good as it is. In fact it has a flaw: It is quite short. It only contains four levels but these are lovely designed and will players get a smile on their faces.

Whoever likes stealthy-games with some kind of action-puzzling and movement-tactic-elements has to play this game. Everyone else who has some time left not knowing what to do should give a try too. The download-link can be found here and players with a Desura-account can get Deity from that source as Freeware as well.