The stealth-action-game Deity has some unique gameplay-features which allow the demon to pass through the levels unseen but deadly. The most interesting feature of course is the chain-attack. This allows the player to set waypoints the Deity will automatically pass by. This can be enemies which will get killed then. Torches which will become purple if they haven’t been purple already. And gargoyles which can not be set as the last landing-point in a chain.

The first enemies the player gets confronted with are templar-knight-guards with shields. These can only attack the Deity when it stands in physical from right in front of them. Hidden inside a torch the Deity is safe from the knights.

The cleric-sorcerers are similar to the knight-guards in regards of their behavior. But they have another weapon against the Deity when it escaped inside one of the torches. If the clerics do know where the Deity hides they are able to attack it in the torch as well.

Last but in no means least are the angels or Valkyries. These creatures have a lock-on-kill-ability. When they see the Deity and start their attack there is absolutely no chance to dodge them in any way. At least their attack will change for the last part of the game which will give the players a more action-oriented game-conclusion. 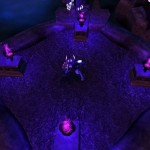 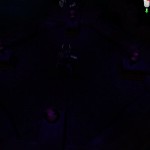 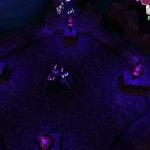 More information on Deity can be found in the review-article for Deity.